Thank you, Tamera, for sharing with us.

101 men and 4 boys landed in the New World in 1607. They hoped to establish a colony for the British and get rich in a search for gold. They built a fort and named the colony Jamestown. There was no gold, but they did find the land fertile for growing tobacco. After years of hardship and trouble with the natives, they managed to rake out a living. Only one thing was missing. Women. Now that they had a prosperous colony, they needed women to marry and create families.

The Virginia Company of London made arrangements for a ship full of women to travel to Jamestown Colony. The women had to be considered reputable to take the voyage. When they arrived, they had a choice. They could marry. If they did, their perspective husbands would pay 200 pounds of tobacco for them. If they decided not to marry, they would become indentured servants to whoever would pay the tobacco price. The masters were required to provide for them until they finished their term or until another man paid for them to be released to marry. If a woman completed the indenture, she would be provided land and resources. Most women chose to marry within the first few weeks of landing on shore.

Life in Jamestown was not easy for the women. Whether they decided to become wives or servants, they worked long, hard hours every day. Within the first year, they went through something called the seasoning where they contracted diseases from the climate. Only half of them survived. Of those who did, many died in childbirth or from the Indian Massacre of 1622.

The Seasoning of Elizabella is a novel dedicated to telling the story of these women who suffered hardships, disease, and death to settle a new land. 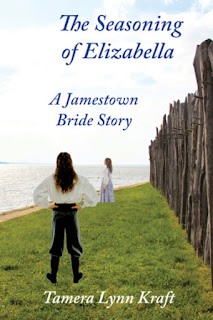 Elizabella can't imagine anything worse than being a Jamestown bride -- but her sister is determined to do just that. On the way to the ship to stop her sister, she witnesses a brutal murder and must flee for her life. She takes refuge on the ship, pretending to be her sister, intending to leave as soon as she is safe. Before she knows it, she is headed for the New World, trapped by desperation and deception.

Miles fled to Jamestown with his family to escape the shame from their father's actions. Tragedy has tested his faith, including the loss of his wife and newborn son. His grief makes him more determined than ever to keep his one remaining brother from following in their father's footsteps.

Award winning author and Mt Zion Ridge Publisher Tamera Lynn Kraft has always loved adventures. She loves to write historical fiction set in the United States because there are so many stories in American history. Forks in the Road, Lost in the Storm, and Red Sky Over America, Alice’s Notions, and Resurrection of Hope  are among her published works. In her spare time, she loves to watch classic movies, drink quality teas, and ride on roller coasters, but not while drinking tea. You can purchase her newest novel, The Seasoning of Elizabella: A Jamestown Bride Story at this link.

Posted by Kathy McKinsey at 3:46 AM
Email ThisBlogThis!Share to TwitterShare to FacebookShare to Pinterest