The Lady and the Mountain Doctor

I recently read two novels which beautifully handle God’s love in the midst of a child’s death.

The first was DANGER IN THE SHADOWS by Dee Henderson. This is the prequel to the O’MALLEY series, which I love.

The second is a book by one of my critique partners. It’s a story set in a mining town in Montana in the 1870s. It is a lovely romance, and handles in an excellent way a brother’s guilt over his sister’s death when he was a young boy. I highly recommend this book, which can be seen here. 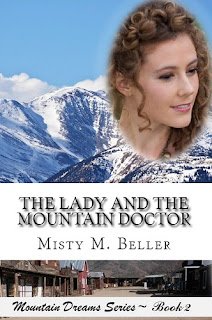 Posted by Kathy McKinsey at 3:05 PM No comments:
Email ThisBlogThis!Share to TwitterShare to FacebookShare to Pinterest

Jesus Got Down in the Dirt

Jesus got down in the dirt to help those who needed him.

He brought value to the sinful woman who wiped his feet with her hair. “‘Therefore, I tell you, her many sins have been forgiven—as her great love has shown. But whoever has been forgiven little loves little.’ Then Jesus said to her, ‘Your sins are forgiven.’” Luke 7:47-48

He asked that the stone be rolled away from Lazarus’ stinking tomb. John 11

Jesus touched the leper. “A man with leprosy came and knelt before him and said, ‘Lord, if you are willing, you can make me clean.’ Jesus reached out his hand and touched the man. ‘I am willing,’ he said. ‘Be clean!’ Immediately he was cleansed of his leprosy.” Matthew 8:2-3

He met the widow in the middle of her son’s funeral and gave her back her child. And hope to survive. Luke 7:11-17

He rubbed clay in the eyes of the blind man. “After saying this, he spit on the ground, made some mud with the saliva, and put it on the man’s eyes. ‘Go,’ he told him, ‘wash in the Pool of Siloam’ (this word means ‘Sent’). So the man went and washed, and came home seeing.” John 9:6-7

He met the woman at the well, rejected and unclean, and gave her a new mission. John 4

He welcomed the grimy, squalling children. “And he took the children in his arms, placed his hands on them and blessed them.” Mark 10:16

Jesus’ closest followers were some who most needed help out of the dirt.

He pulled Peter out of the water as he began to sink with fear. Matthew 14:27-31

Then Jesus lifted Peter out of the mire he wallowed in after denying his Lord. John 21:15-17

He found Matthew and Zacchaeus, hated by their community, and asked them into his family. Matthew 9:9; Luke 19:1-10

Jesus got down in the dirt. He met people right where they were, loved them, and didn’t leave them in the dirt.

He claimed as his daughter the woman who had suffered for twelve years from bleeding and shame. He held the hand of the little girl who died, and gave her back to her parents, alive. Mark 5:21-43

He knelt in the dirt and waited with the woman caught in adultery, until all her accusers left. The only one there who had never sinned, Jesus, was left with the wretched woman, and he did not condemn her. John 8

He met the father whose son could not be healed, the man who scratched to find faith, and rewarded him with all that he could hope for. Mark 9:14-27

For the man filled with demons, fighting with such fierceness that he broke his chains, Jesus gave him clothes. And Sanity. Mark 5:1-20

There is nowhere, no depth of sin and waste, where Jesus will not meet us. When we are damaged, hurting, faltering, Jesus does not push us away. He holds our hand and helps us up. “He will not quarrel or cry out; no one will hear his voice in the streets. A bruised reed he will not break, and a smoldering wick he will not snuff out, till he has brought justice through to victory. In his name the nations will put their hope.” Matthew 12:17-21
Posted by Kathy McKinsey at 6:22 AM 1 comment:
Email ThisBlogThis!Share to TwitterShare to FacebookShare to Pinterest
Newer Posts Older Posts Home
Subscribe to: Posts (Atom)