This is an excellent article on forgiveness. Thank you, MaryAnn.

“Deck the Soul with Boughs of Forgiveness” 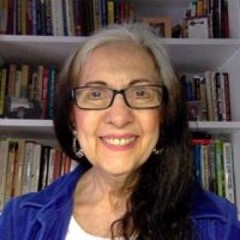 (AUTHOR’S NOTE: I originally wrote this article one Christmas, but I believe it applies throughout the year.)

CHRISTMAS! The word evokes many feelings, depending on our experiences. For some, Christmas is a happy time, filled with beautiful memories and joyful expectations. For others, Christmas is a depressing time, a season one wants “to get over with” as quickly as possible because of bad memories associated with this time of year.

Having ministered to people for many years, I have come to the conclusion that depressing memories at Christmas time are most often related to problems of unforgiveness. Hurts from the past become more pronounced during the Christmas season, but the reason those hurts still affect us is that we have not let go of the bitterness associated with them. In short, we have not forgiven the people who have hurt us.

Why do most people have such a difficult time forgiving? I believe the main reason is that they do not understand what forgiveness really means. If you are one of those people, what follows may help you:

LET’S LOOK AT WHAT FORGIVENESS IS NOT:

• Forgiveness is NOT letting someone off the hook.

• Forgiveness is NOT condoning evil.

• Forgiven is NOT being a doormat.

• Forgiveness is NOT having to trust again the person who hurt you.

• Forgiveness is NOT a feeling.

• Forgiveness is NOT an option.

NOW LET’S LOOK AT WHAT FORGIVENESS IS:

• Forgiveness IS taking the person who hurt you off of your hook and placing him on God’s hook, then praying that God will have mercy on him.

• Forgiveness IS acknowledging that evil was done but choosing to bear the consequences of that evil without retaliation.

• Forgiveness IS taking charge of your emotions.

• Forgiveness IS setting boundaries with the person who hurt you, even refusing temporary or permanent interaction with that person, if necessary. An example would be a wife who is being beaten by her husband.

• Forgiveness IS a decision.

• Forgiveness IS obedience to God’s commandment to forgive.

No matter how badly you have been hurt, choose to forgive. It’s the best thing you can do for your own well-being. Unforgiveness chains you emotionally to the person who hurt you. Forgiveness breaks that chain and sets you free.

What better time is there than the Christmas season to forgive those who have hurt us? The very essence of Christmas is the truth that God forgave humanity through the shed blood of Jesus Christ. Who are we not to forgive when God has forgiven us?

MaryAnn Diorio is a widely published, award-winning author of five novels, two novellas, and eight children’s books. Her novel, In Black and White, won First Place in Historical Fiction in the 2020 Christian Indie Awards Contest. MaryAnn’s latest novel, Miracle in Milan, takes the reader on a tension-filled journey back in Italy, where MaryAnn’s trilogy, The Italian Chronicles, also took place.  MaryAnn is married to her awesome husband of 51 years. They have two amazing adult daughters, a very smart son-in-law, and six rambunctious grandchildren. When not writing, MaryAnn loves to read, play the piano and mandolin, and make up silly songs with her grandchildren. You can learn more about MaryAnn and her writing at https://www.maryanndiorio.com 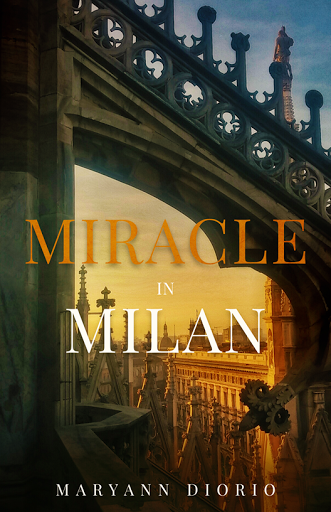 Title: Miracle in Milan - A Novel

Blurb: A young, female auditor discovers convincing evidence that the man she loves is an embezzler.

May my cry come before you, Lord;

give me understanding according to your word.

May my supplication come before you;

deliver me according to your promise.

May my lips overflow with praise,

for you teach me your decrees.

May my tongue sing of your word,

for all your commands are righteous.

May your hand be ready to help me,

for I have chosen your precepts.

I long for your salvation, Lord,

and your law gives me delight.

Let me live that I may praise you,

and may your laws sustain me.

for I have not forgotten your commands.

Father, you know that I have strayed. Thank you that you seek me still. Thank you, Lord, that I can cry to you for help. Help me praise you, Father.

Posted by Kathy McKinsey at 5:05 AM 6 comments:
Email ThisBlogThis!Share to TwitterShare to FacebookShare to Pinterest
Labels: Kathy McKinsey, Praise the Lord, Psalm 119:169-176, Taw, The Lord Seeks Us

Later, we were joking around at breakfast, and Sarah said, "I was so happy, my shoe fell off."

March 22, 1998: Sarah asked Murray, "When we're not at Grandma Brinkmann's house, does she speak English?"

Sarah wanted some of Murray's drink, and when he said no, she said, "Please -- I won't say ‘Ew’ for your germs."

April 1, 1998: We recently got some new pillows. Sarah went to bed with one of them, but she thought it smelled unfamiliar. "When will it start to smell like us?"

This weekend, the kids asked Murray if they could get a toy from a vending machine in a grocery store. Murray helped Sarah buy her toy; she may never have used a vending machine before. He showed her the hole where to put the money, and the handle. She put the money in, and he said, "Now, turn." Obediently, she stood and spun herself around in a circle.

April 3, 1998: Yesterday Rebecca informed us, "I know exactly what I'm going to do when I grow up, and I'm not going to change my mind this time." She is going to work with snow leopards, either in a zoo, or hiking to find them in Asia.

Murray has taught the kids that April fool's jokes are for all of April, not just April 1. This afternoon, I told Ping-Hwei to do his Chinese school homework. A few minutes later he told me, "I can't find my Chinese homework." I said he needed to keep looking for it. He said, "April fool!" He was so proud of himself, he kept saying, "April fool; I tease you."

April 30, 1998: A while after telling them that they could play out for 15 more minutes, Murray went outside to tell the kids to come inside, and Sarah was angry that the time was already up. She said, "It was her that wasted all our timeout here!" Pointing at Rebecca, she shouted, "Her!"

May 2, 1998: Yesterday, Caleb went horseback riding with the kids from the Visual Impaired room at school, and, of course, he's been talking about it for weeks. Yesterday morning, I was singing with Benjamin's toy radio, "Zippity do-dah, zippity day!" and Caleb said, "I think today's going to be a zippity do-dah day."

May 4, 1998: After going to their room for bed, Rebecca read to Sarah, both sitting on Rebecca's bed. There were some loud words after a while, and Murray looked in. Rebecca was kind of mad: "She promised me she would stay awake, and she keeps falling asleep." "But there's no way people can keep from falling asleep when they're that tired," Murray explained. "But she could sit up, and she won't." When Murray next looked, Sarah had her hands on her cheeks, holding her eyes open.

May 8, 1998: Rebecca was doing her spelling words tonight, and spelled, "constellation." “What does it mean?” I asked. "When you constellute someone," she responded.

May 28, 1998: Rebecca had a question about her shoes today: “Can we throw these away? They're broken (cracked) and have spider blood on them. “I don't see any spider blood on them, Rebecca,” Murray said. “Well, I know they do, because I stepped on a lot of spiders."

June 5, 1998: Tonight Caleb told us that he had heard once of a man who had been building a cage for alligators and one of the alligators had bit his hand off. Sarah asked, "So was he able to build the cage?"

This children’s book sounds delightful. And, “The weak and weary in need of a Savior,” I can surely relate to.

The world is full of self-promotion. Flip through social media and see the many selfies, faces yearning for a compliment. Click through YouTube and watch all of the “yous” saying “me, me, me”. Listen to conversations and hear people talking over each other, at each other, past each other, in an attempt to be heard, or seen, or praised.

The world even demands we self-promote. Stand out or fall off the map! As I write this, I am in the middle of working toward tenure at a university. This means I have a certain number of years to convince a committee that I am worth keeping around. And so, I keep asking myself if the work I am doing will make me look good? Will anyone care that I’ve done this? How can I get credit for this? Who will notice me?

And now, my wife and I have just released a new children’s picture book, and we, like every writer or illustrator, are being asked to promote ourselves in order to introduce it to new audiences. We are being asked to tell the world why it should pay attention. 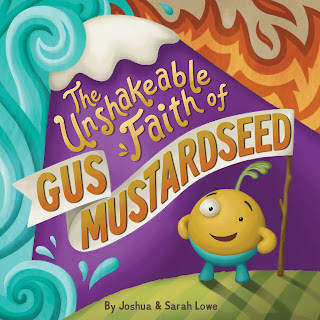 This desire to toot our own horn is not new. My toddling children have taught me that selfishness starts at the beginning, and I’ve learned from myself that it doesn’t go away as we get older. Perhaps the thing Gus Mustardseed can teach us most clearly in this book is that the Lord doesn’t need heroic figures without fault. In fact, He seemingly delights in using the weak.

The Unshakeable Faith of Gus Mustardseed was inspired by a parable of Jesus in Matthew 17:20, where He speaks of faith that can move mountains. However, the character of Gus was pieced together by the many small, unlikely people and circumstances the Lord has used to make Himself known. The ones who could not boast in themselves. The weak and weary in need of a Savior.

Perhaps God can use this tiny book for His glory. Perhaps he will use children who embrace big faith. Perhaps he is using you.

By Joshua and Sarah Lowe

Joshua and Sarah Lowe are the husband and wife team behind The Unshakeable Faith of Gus Mustardseed. Based in Illinois with their three children, Joshua is a professor at the School of Art and Design at Illinois Wesleyan University and Sarah is a professional illustrator of textiles, games, children’s decor, and book covers. Together, they have a passion for combining visuals and storytelling into lively picture books. You can visit them at www.thelowescreate.com. 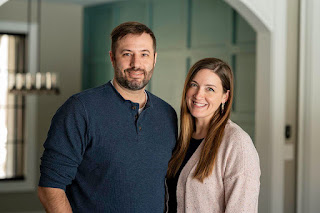