As we buckle into our seats, my hubby Bert prays before even starting the car. After two near collisions in the past two weeks, neither of us will go anywhere without asking the Lord for His divine protection. Here’s why:

We were driving home from our annual family retreat in Sunriver, OR, when our first near collision occurred. We’d spent five wonderful days playing games, sitting in a hot tub, taking long walks, and catching up while stuffing our faces. All of it our idea of a relaxing family time.

On the two-lane road that takes us home to Idaho, we listened to a favorite pastor’s sermon. The beautiful autumn leaves, the crisp air, and two hot coffees to-go always make the six-hour drive enjoyable.

About four hours into it, we began the descent from the steepest point of our drive. There isn’t a guard rail or much shoulder between us and a beautiful valley below.

“Oh, Lord,” we breathed. Coming up the hill from the opposite direction, a sedan decided to pass a semi-truck in front of it. At that moment, it was as though the Lord created a median. Our car passed within inches of that sedan.

Neither of us could ever recall passing so close as to see a driver’s eye color, hair style, or clothing. God performed a miracle that day, and we thank Him that His hand is never short, and always outstretched toward His children!

The next collision occurred one week later. We were on our way to a prayer meeting that began at 8:45 a.m. at our church. In typical fashion, I was running two minutes late. I announced, “We should’ve left the house at 8:30. It’s 8:32.” My long-suffering husband said nothing, dutifully started the car, and we were on our way.

I looked at the dashboard clock. 8:45. We had another two streets and two more 4-way stops before we’d arrive at church. “Lord, I promise to get up five minutes earlier next Sunday.” That was my prayer when I heard Bert say, “Oh, God.” Mind you, he never says, “Oh, God.” Gosh or goodness, yes. But he sincerely meant, Oh, God!

An SUV in front us had turned left at the intersection. A car from the opposite direction broadsided the SUV at full speed. That driver hadn’t seen his stop sign. The SUV hit one of the stop signs, preventing it from going into a ditch, and rolled over onto the other driver’s car.

By God’s grace, both drivers walked away from the accident! Bert helped the woman in the SUV, who had minor cuts and scrapes. The other driver’s airbag had deployed, and other than shock and sincere sorrow, he was fine. I called 9-1-1, and then directed traffic through the 4-way stop.

Yes, that SUV could’ve been us. But the moral of the story isn’t – Don’t be late for prayer meeting/church! It is, however, to pray and praise the Lord. Whether we feel or see it, He is always working for our good and for His glory.

If I Were You by Lynn Austin. The most detailed book of World War II I’ve ever read about people in England surviving the German bombings, both in London and in the country and villages. Two young women become volunteers to help with the war effort, then join the army and drive ambulances. Through all the hard times and sorrows, they struggle to find their faith in God and accept his and each other’s forgiveness.

Sworn To Protect by DiAnn Mills. This is a novel of suspense, a story which gives a careful look at border patrol and immigration law.

Gold Rush Prodigal by Brock and Bodie Thoene. From Hawaii to whale boating to prospecting for gold in California, this story introduces us to fascinating characters and adventure.

Hope Harbor by Irene Hannon. A heart-twanging story of a number of people who need God’s grace for themselves and to offer to others.

The Gift: a horse, a boy, and a miracle of love by Lauraine Snelling. A lovely Christmas story, including fun descriptions of training a small boy on care for and riding a horse, and hope for three hurting people.

They can't kill us all: Ferguson, Baltimore, and a new era in America's racial justice movement by Wesley Lowery. A journalist’s honest and heart-felt look at loss of life of Black people at the hands of police. Including the death of Michael Brown, an unarmed 18-year-old in Ferguson, Missouri; the death of a twelve-year-old boy with a toy gun in Cleveland; incidents in Charleston and Baltimore. Also looks at the church massacre in Charleston and vigilante killings of Black people. the protests that follow, fights with police, and how young people started new activist groups. Lowery asks the question, “What does the loss of any one life mean to the rest of the nation?”

Posted by Kathy McKinsey at 7:21 AM No comments:
Email ThisBlogThis!Share to TwitterShare to FacebookShare to Pinterest
Labels: A variety of Good Reads, Books for Christmas Gifts, Kathy McKinsey

Enjoy this interview with Angela D. Shelton. I want to visit her ranch.

Faith & Fellowship Book Festival announced The Angel Book Awards for 2022 on November 4th and we’re pleased to interview Angela D. Shelton, author of the Collapse series. The first of the three books, Collapse, won second place in the middle grades/young adult category. Angela shares the story behind the series.

What made you want to write in the young adult, post-apocalyptic, Christian genre?

My parents raised me in a church that preached a LOT about end times. That left me with a fascination with post-apocalyptic tales, so writing one came naturally to me. Going through the teenage years was a painful experience for this shy gal and being a young adult has gotten more difficult every year. I can’t imagine how much more challenging teenage life is with social media running our lives. I hope my stories provide an escape and an encouragement when needed.

How does your everyday life show up in the novels?

Three years ago, my husband and I bought a ranch and started raising beef cattle. It’s been an adventure from day one. Working with animals provides plenty of fodder for stories. You’ll see a lot of what has happened to me in my stories. One example in my first book is where the heroine’s mother suffers from heat exhaustion. I’ve come so close to this frequently, especially when I’m determined to get a job done outside in the heat and work too long.

How does your faith show up in your novels?

My goal has been to write stories with a lot of tension, but with a positive message in the end. Tension, or stress as it’s often called, is part of life. I want my narratives to reflect the realities that none of us are perfect, but that isn’t the end of the tale. The challenge is to share a positive message with lessons learned—without preaching. I think I’ve managed that in this series. That way, they make splendid gifts for young people, without the risk of coming off preachy yourself.

The three-book series is available on Amazon now. 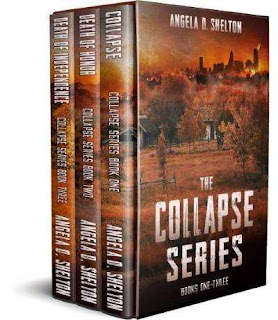 After a global catastrophe wipes out millions and devastates global resources, three teens must navigate a new life.

In book one, Collapse, Jan learns the hard lesson deception serves up. She trusts the wrong person and brings even more hardship to her family. Can she rally behind the right people before the battle for their ranch begins?

In book two, The Death of Honor, Caleb’s haunted past comes back with a vengeance. He hides the truth from those he loves, making him the perfect target for blackmail. Will he confess before his family pays the price?

Book three, The Death of Independence, follows Olivia after her father abandons her. Stuck with incompetent relatives, she struggles to eke out a life for herself and them. When a man makes her an offer she can’t turn down, will he pull her into a life she never wanted?

The Collapse series is a young adult, post apocalyptical alternate reality by Angela D. Shelton. Explore these tales of survival in a shattered world.

Posted by Kathy McKinsey at 3:44 PM 4 comments:
Email ThisBlogThis!Share to TwitterShare to FacebookShare to Pinterest

Psalm 11, God Keeps Us in His Sight

For the director of music. Of David.

In the Lord I take refuge.

How then can you say to me:

For look, the wicked bend their bows;

they set their arrows against the strings

to shoot from the shadows

at the upright in heart.

When the foundations are being destroyed,

what can the righteous do?”

The Lord is in his holy temple;

the Lord is on his heavenly throne.

He observes everyone on earth;

his eyes examine them.

The Lord examines the righteous,

but the wicked, those who love violence,

he hates with a passion.

On the wicked he will rain

a scorching wind will be their lot.

For the Lord is righteous,

the upright will see his face.

Lord, David shared about times when he was not upright. But he begged for your forgiveness, and he excepted it. I want to be loved by you like David.

Father, we know you are just. You have told us what to do when the foundations of our world are being destroyed. Remember that you are on your throne, in charge, and you keep us, every one of us, in your sight.

Posted by Kathy McKinsey at 6:28 AM 6 comments:
Email ThisBlogThis!Share to TwitterShare to FacebookShare to Pinterest
Labels: Kathy McKinsey, Psalm 11, The Lord is on His throne, The Lord Keeps Us in His Sight, When our world is in turmoil
Newer Posts Older Posts Home
Subscribe to: Posts (Atom)