Thank you, Angela, for sharing with us.

…Except maybe that one.

Whenever people hear I live on a cattle ranch, specific visions pop into their minds. Fields, fences, cowboy hats, and horses are among the most common. Romantic rides into the sunset.

First, I live in Georgia. Think yellow pine—everywhere. Ranchers carved pastures out of the trees here and the fence lines need to be maintained or those pines will take over in a heartbeat.

Second, we rarely ride off into the sunset. We may enjoy it from the back deck, but we don’t have time to meander towards it, most days.

One of the most frequent questions is: “Do you have a horse?” Usually, children ask this, and it’s most often a girl who inquires. Sometimes big girls, too. But unfortunately for them, the answer is always the same: “No.”

We don’t have the time or money to devote to one more animal. I can’t tell you how many times I’ve said that to myself, or to my husband. And he’s said it many times to me as well.

But then we saw this poor Labrador lying beside the road, obviously in trouble. She’d been hit by a car. No tags, no collar, nobody to take care of her.

We already had two large dogs. Ricky and Lucy, who are constantly underfoot. No, really. Constantly. I can’t tell you how many times I’ve tripped over a dog who was determined to lie beside me, under my feet, or behind me when I wasn’t looking.

As a couple, we’ve agreed, many times, no more dogs, cats, birds, snails… anything that requires care. We’ve got plenty to care for now as it is. Thank you very much!

And then we saw her. Lying there. We couldn’t drive by.

When my husband lifted the dog into the truck, she was too dizzy from a concussion to do more than nip at him. The poor baby. Fortunately, our vet was nearby, an extremely kind man with a staff who loves animals and cares for them.

After a week in the doctor’s office, and she was well enough to go home. But where was home? We didn’t know, and she wasn’t telling. The local vet hadn’t seen her before, so he didn’t know where she belonged either.

We called a few people and shared her picture, but no home.

Now we have three big dogs that we trip over and fight with for the couch.

Apparently, we had room for one more in our home and in our hearts. I guess our limits aren’t more than mental stopping points.

Perhaps you have a place in your heart where you’ve put up your hand and said, “no more.” Is there perhaps a little wiggle room instead? Not necessarily a dog, but perhaps a friend you can invite on a girls’ day out? Or a neighbor who could use a home cooked meal? Or a charity who could put that last $5 in your pocket to good use?

Take a peek. Maybe you really have room… for one more.

Collapse: The Death of Honor is in pre-release sales now and is live on June 1st. 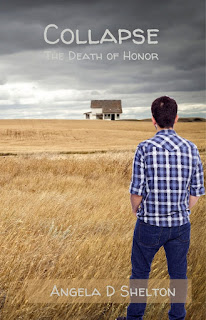 Caleb already lost his dreams when the variant ended life as he knew it, but when blackmailers threaten to destroy his life permanently, he must learn to trust others to forgive or lose the only family he has.

In a collapsing society, former quarterback Caleb Worthington is no longer a teenager with a secret in his past, but a man searching for his future. But when a blackmailer uses his mistakes against him, his nightmares take over reality. Now, trying to safeguard everything the Worthingtons stand for, he’s finding out being a man is as much about one’s choices as actions—and his are putting his family at risk.

As the blackmailers up their game, his home-field advantage dwindles, and he can’t count on his teammates since even his best friend is acting the fool.

Unwilling to share the burden, despite how it’s affecting his family, can he find an honorable play once this “game” really kicks off? And what will it take for Caleb to come clean with those he loves?

Posted by Kathy McKinsey at 3:41 PM
Email ThisBlogThis!Share to TwitterShare to FacebookShare to Pinterest