Author Denise Weimer gives us a glimpse into her new story, A Harvest Heart, and lets us in on a deal. Thank you, Denise.

#16 in The Georgia Peaches Series 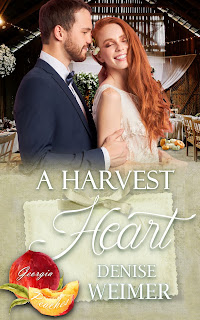 Hope Richardson is good at just that—hoping. Problem is, she’s often disappointed—by fathers who die, boyfriends who ghost her, and promotion at her event planning firm. It’s her twin sister, Faith, for whom things work out. When Faith’s fiancé lands an out-of-town job, Hope is called home to plan a wedding in the Georgia foothills … and jumpstart the tea room Faith was supposed to run with their mother.

Of all the people to make the first reservation for his family farm’s new event barn, Tucker Bradshaw least expects Hope Richardson. She might’ve rebound-dated him their senior year of high school, but she was all too eager to run back to the star football player in college. Always wanting something bigger and better than their hometown of Clarkesville. Than him.

Her sister’s wedding plans land Hope in the midst of the opening season for Tucker’s corn maze. When a harvest romance reignites, Hope searches for the faith to finally live up to her name.

Denise Weimer writes historical and contemporary romance and romantic suspense mostly set in her home state of Georgia. The author of a dozen traditionally published novels and a number of novellas, she's also an editor  independently and through Iron Stream Media Fiction, a wife, and a mother of two daughters. She always pauses for coffee, chocolate, and old houses. https://www.deniseweimerbooks.com 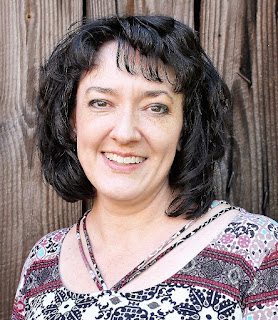 Tucker Bradshaw was pounding the last nail into the kitchen window frame of his family farm’s new event barn when voices made him pause. Female voices, coming from the main room on the other side of the open slider door.

“Oh, look at the woodwork. I love how they left the beams exposed, with those fancy metal brackets.”

“I do love the stone fireplace. But it’s very rustic. A far cry from the Charm House.”

“We can’t afford the Charm House.” The first speaker again, her airy voice growing tight. “And see, we could put the band up in that loft.”

Tucker laid his hammer next to the window he was about to insert. Apparently, he’d forgotten to bolt the main doors when he’d started work this morning. That’s what you got for being in a hurry … nosy women comparing his post-and-beam Gambrel barn to a Greek Revival mansion in the nearby historic town of Clarkesville. He ought to be out working the summer harvest with his dad and brother, but the rain had put his local contractor behind. And this place needed to be brochure-photo-ready this month if they hoped to pay back the massive loans they’d taken out this year.

So despite the fact that these women weren’t supposed to be in here, he put a smile on his face as he ambled into the main room. “Can I help you ladies?”

And there he stopped short, for not one, but two petite redheads turned toward him. He’d seen Faith Richardson a couple times in the last several years, whenever he’d been home from college. Each time, he’d done a painful double-take before his heart rate slowed down. But she must not have expected him to be back home, for she spoke with surprised emphasis.

And no need to double-take today, for her sister was right there beside her, unmistakable and in the flesh. Every fiber in Tucker’s body went into some sort of instant freeze-dry as Hope’s dark eyes swept him from the top of his tousled blond hair to the tips of his scuffed work boots.

“Faith. Hope.” Her name stuck on his tongue like the honey they sold in the open-air market across the parking lot.

“Hey, Tucker.” She seemed to pump enthusiasm into the greeting with the breath she drew, lifting her shoulders under the straps of her silky, red tank top. The only ginger he’d ever seen pull off wearing the color stood before him. The only girl who’d crushed his heart like a Ritz cracker.

Faith took a step forward. “I should’ve known you’d be here today.” Was that an apologetic glance she tossed at her sister? “I told Hope you’ve been behind the changes at Bradshaw Farms, even while you were still in school in Tifton.”

“Griffin,” he corrected. “ABAC is in Tifton.”

“Oh, right. Of course. And you went to UGA. I forgot that you and Hope started together in Athens before you went to … Griffin.” Faith faltered as her gaze again drifted to Hope, who shifted her purse on her shoulder and focused on the concrete floor. “Anyway, I love your new barn. Did you do it all yourself?”

He hooked a thumb in the pocket of his jeans, trying hard for casual. “It’s a kit barn. The company we bought it from came to lift the bents and drop the ridge in place. Basically, they raised the shell. We finish the inside. That’s why, as you can see, it’s not done.”

Tucker jerked his thumb behind him. “You wouldn’t say that if you saw behind the slider. I’m finishing window installation, then I’ve got to frame out the kitchen and bathrooms so the plumber can come in.”

“Well, I’d love to see behind the curtain, so to speak.” Faith gave him a wink. She seemed perkier than he remembered. She’d hardly spoken to him in the past. “You see, I got engaged. We’re shopping for a reception venue.” She thrust her left hand toward him, bringing his attention to a shiny diamond.

She nodded and smiled, catching her lower lip between her teeth.

Hope brushed a strand of hair back. It fell just past her shoulders now, shorter than it had been in high school. “I told Faith you might not be ready for bookings. She doesn’t realize how much goes into planning big events.” She definitely sounded hopeful.

“And I guess you’re the maid of honor?”

“And the wedding planner, basically.”

The Richardson-Watkins wedding on Bradshaw property would mean Hope Richardson shoved back into his sphere. Again. But it would also snag one of the biggest events of the season. Even though Neal’s parents had moved to Chattanooga, his extended tribe remained in Habersham County—the reason he’d attended their local college. And they were one of the most influential families in the area, benefactors of said college.

“Then let me show you around. We’ll be ready in plenty of time for a mid-October wedding.” Did that sound confident enough?

Tucker walked them into the rear portion of the building, his back burning. He could just feel Hope studying him. His t-shirt might catch on fire from the intensity of her perusal. Sure enough, when he pivoted to face them, she whisked her gaze back to his face, giving a startled blink. He almost laughed. That moment of unguarded attention gave him confidence. At least he wasn’t the only one affected by proximity, even four years later. 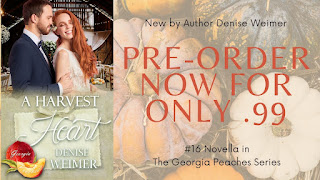 ** Want to read more? Today through the end of the month, you can pre-order an e-book of A Harvest Heart for .99!**

Posted by Kathy McKinsey at 4:27 PM
Email ThisBlogThis!Share to TwitterShare to FacebookShare to Pinterest